About the Master Plan Update Process

The Airport Master Plan update is expected to take between 18 months and 2 years to complete. There are three main phases to the plan: inventory and forecasting, developing and selecting the preferred plan, and finalizing the Preferred Alternative.

In order to develop a master plan that properly fits our growing community, we first need to understand what’s already happening. To do so, the City, the airport, and their engineering firm will begin the project by diving deep into the existing airport facilities and operations. The team will develop an inventory of planes, establish the airport’s physical layout, and confirm companies currently using the airport, and use that inventory to determine the most likely outcomes of future activity. Many data points are used in this determination, including the types of aircraft that currently utilize the airport, the number of operations (a take-off or landing of an airplane) of each type of aircraft, the condition of the facilities and land, and the businesses and tenants that operate at the airport. Historical data and the current numbers are used to establish the airport forecast.

The forecast is a detailed idea of what future operations at our airport will look like. It is based on the current inventory, the airport’s historical data, and details about national and statewide aviation trends. The forecast forms the basis for effective airport planning decisions. The Federal Aviation Administration must approve the airport’s forecast before the airport can use it to update its master plan.

The Airport Layout Plan (ALP) serves as a critical planning tool that shows both existing facilities and planned changes for an airport. It can be considered a complete snapshot of the airport at the end of the 20-year planning period. It is also used to justify future federal funding for airport projects.

Per the FAA, an ALP is a plan for an airport that shows:

As part of the Airport Master Plan update process, Heber City will develop a number of layout plans that show the potential evolution of the airport. These options will be discussed, revised and narrowed down to three alternatives. The community is an essential voice in this process and will have ample opportunity to see the options for the ALP, as well as to weigh in on which version they would like to see at Heber Valley Airport. The airport sponsor (in this case, Heber City) will listen to the recommendations of the community, the project team, and the Community Advisory Committee and the Technical Advisory Committee, to select a single Airport Layout Plan as the Preferred Alternative going forward. The Federal Aviation Administration must accept the Preferred Alternative before the airport can proceed.

Once the preferred alternative has been determined, the engineering staff will work to develop the final documents and plans that will guide the airport to reaching its 20-year goals. They will draft the short-, mid- and long-range projects that would be followed to implement the plan. Like any business plan, the Airport Master Plan the plan is a living document that will adjust depending on changing demand, future regulations, technological advancements and funding availability. However, the updated Airport Master Plan will be the flightpath for the Heber Valley Airport for years to come. 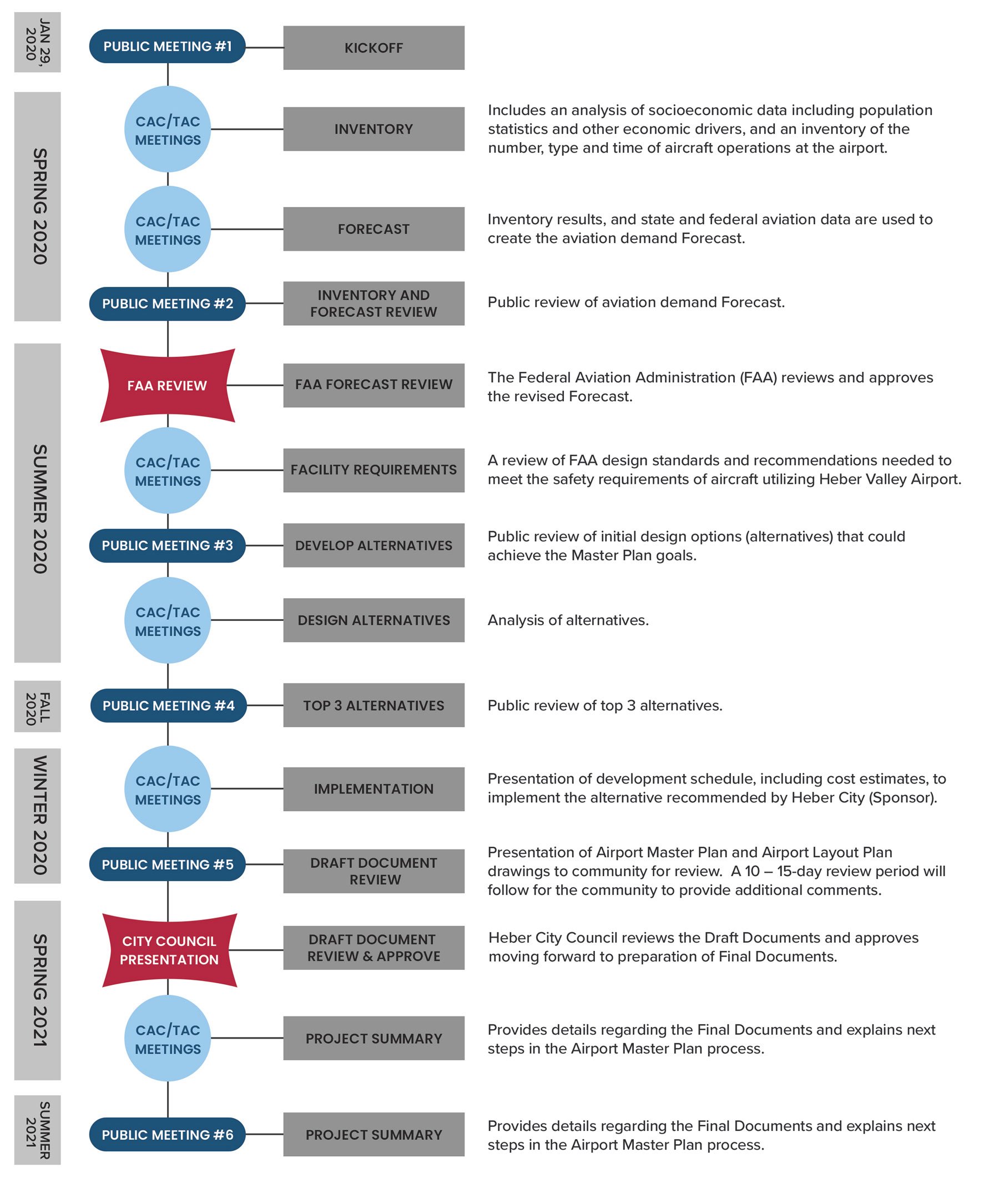